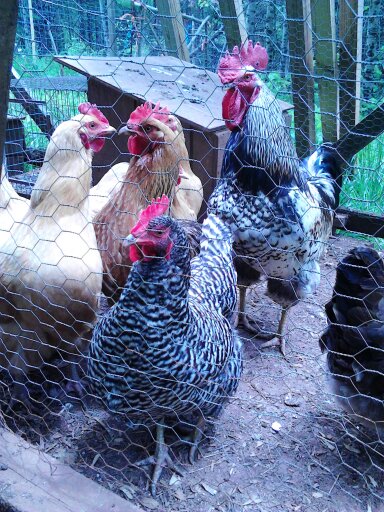 I have to say Roger and these ladies bring me a lot of pleasure.

I enjoy watching them out on their daily forages out an about the property. Generally I let them out after the girls are finished with their laying activities so they will be less likely to start a nest in some place that is difficult to find or reach once discovered. This happened once.I found about eighteen eggs under a thicket of brambles. These went scrambled to the dogs as a nice treat over the course of a few days since I had no idea how long those eggs may have been out in the woods. It turned ot they were fine and the dogs were pleased to have them.
That was before Roger joined the flock. He’s a gentle fellow and I think very handsome. He was a much appreciated gift from a neighbor who had another rooster who treated Roger unkindly, it seems.
I have seven laying hens and get on average five or six eggs a day while the sun is high this time of year.
Every once in a while there will be a three or four egg day and occasionally a even egg day.
I let them out in the afternoon and later on, at dusk, they take themselves back home to the coop. While free ranging, they go about their chicken business of scratching in the compost created by the goats and alpaca. They enjoy taking dust bathes in a couple of locations they have collectively selected for that activity. They treat themselves to cool drinks where there is a pot that captures runoff from the outside spicket. On hot days, they like to lounge under a shed that is up on blocks allowing for the storage of left over wood waiting for future projects.
They have their own chicken language of contentment, irritation, alarm and alert. As they preen and nestle under the shed or in their dust bowl, they murmur, cluck and chirp quietly. They can be mean or kind to one another while they definitely have a pecking order, they also develop alliances. I have to say, watching a flock of chickens can be a fascinating way to spend a little time.